Memories of Trotsky in Turkey

I travelled to Istanbul in August 2010, mainly for a family reunion. We stayed in a nineteenth century villa in Buyukada Island, an island off the coast of Istanbul in Marmara sea. Buyukada is the largest of the Princes’ Islands in the Sea of Marmara, a 20 minute boat ride from the city of Istanbul in Turkey. My visit coincided with the great heat in summer of 2010. I experienced hot and humid days where the temperature would reach 50 degrees Centigrade; as a result, mobility during the day was minimized to either staying indoors away from the sun or swimming in the ocean. I managed to make several trips to Istanbul during my two-week stay. What I have here is a collection of images from Islamic and the Byzantine Architecture, the grand market in Istanbul, life in the island, and the nineteenth century architecture of villas on the island. Life in Turkey seemed as contemporary as life everywhere else in Europe or North America, but what was interesting to me as a visitor was the clear democratic existence of the old and the new with all their differences. The city of Istanbul has an intriguing history of belonging to the Romans during the Byzantine era, and the clear signs of architecture from that period are well treasured and preserved. I could walk on a street and see Romanesque architecture like Haja Sophia church on one side of the street and quintessential Islamic architecture like the Blue Mosque or the Suleimanieh mosque on the other side of the same street. The same preservation of the past and tolerance for differences were evident on Buyukada Island, where the nineteenth century wooden villas, built by upper middleclass Jewish Turks, were appreciated by large Muslim crowds during the weekends. Images of hundreds of head-covered Muslim women walking amongst the very nineteenth century European housing were a delightful sight to see. Different styles and faiths living side by side in harmony to me was the evidence of contemporary life in Turkey. Perhaps I felt so much at ease and at home with the contemporary nature of life there that I was hardly worried about exploring the Contemporary Museum of Art in Istanbul!

I would like to dedicate this report to Leon Trotsky who spent four years of his life from 1929 to 1933 on Buyukada Island after Stalin exiled him from Russia. 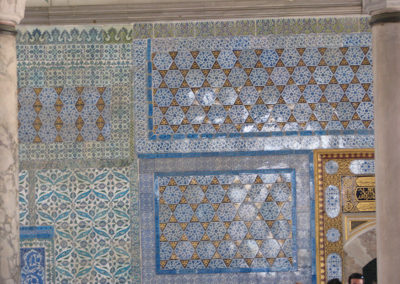